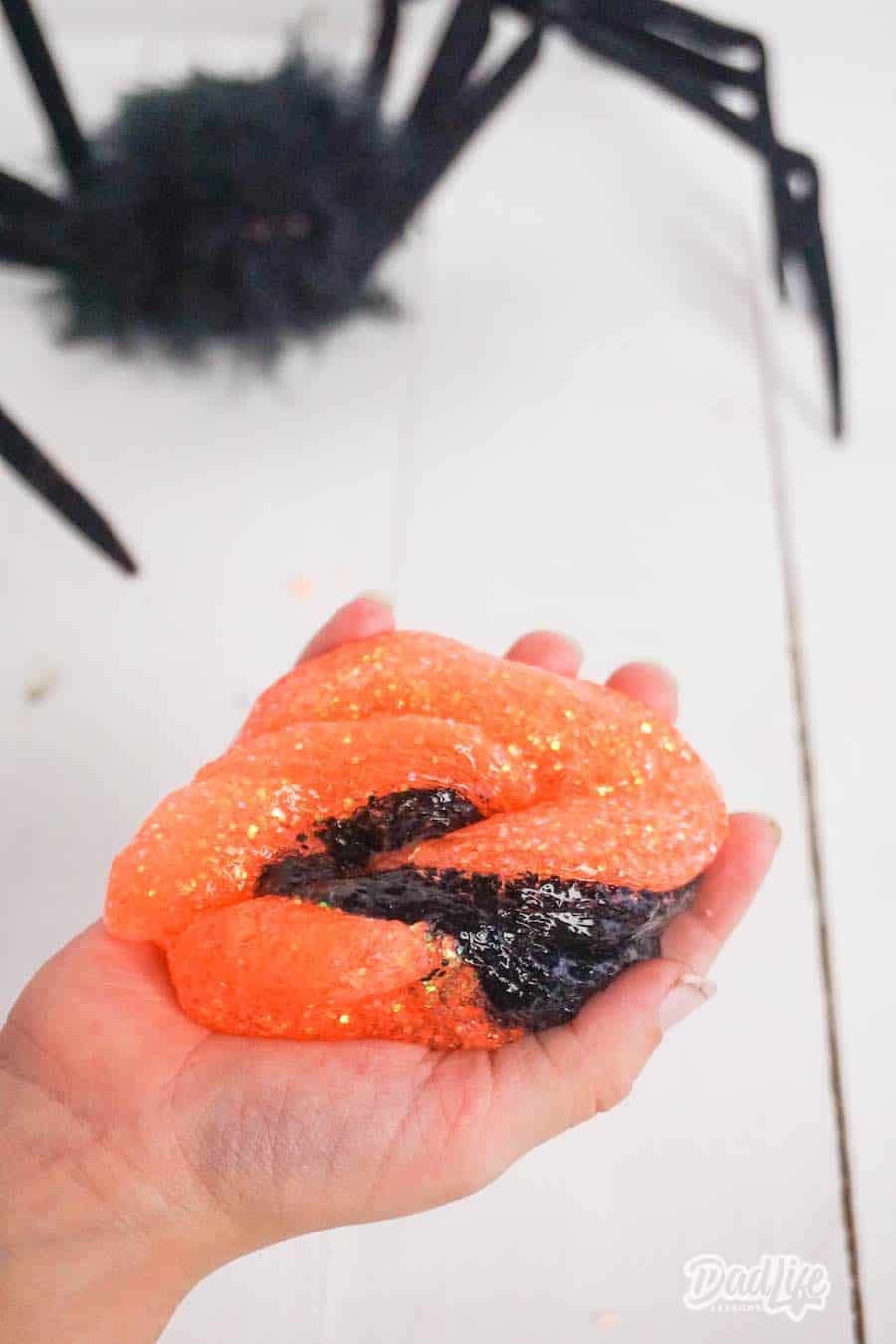 If you’re looking for something fun to do with the kids that’s inside, not too terribly messy, with a Halloween theme, check out this Halloween Slime. It’s a super easy recipe with glitter and just fun-times written all over it! It was much too hot to play outside the other day and my kids were in the mood to do something. Anything. And, with Halloween coming, I decided it might be fun with the kids and share with yall How to Make Halloween Slime. I would say that I scored pretty high on the “awesome dad” odometer because they played with that slime for 30 minutes. And then they went back to it several times throughout the day to play with it a little more. Dad for the win. 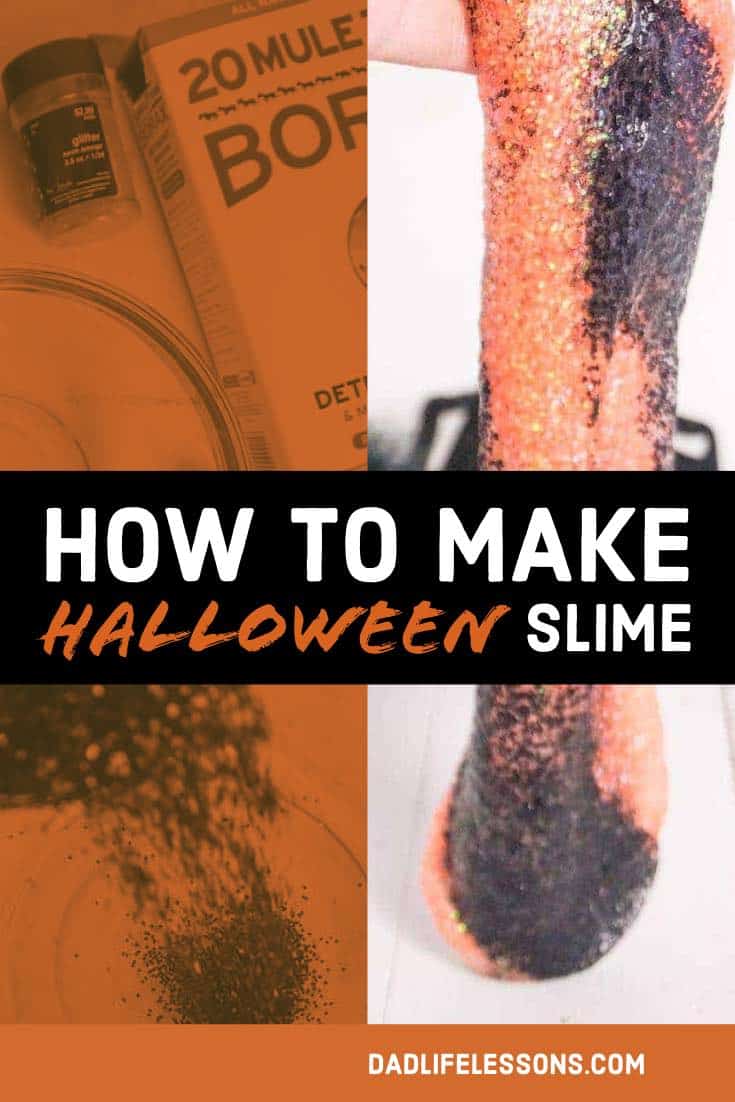 How to Make Halloween Slime

Make sure your work surface is clean and tidy. I made slime once that ended up with some sawdust in it from the table. I swear the slime never touched the table and the sawdust didn’t jump into the bowl. But either way, the slime had sawdust in it and it was less pleasant for the kids that way. 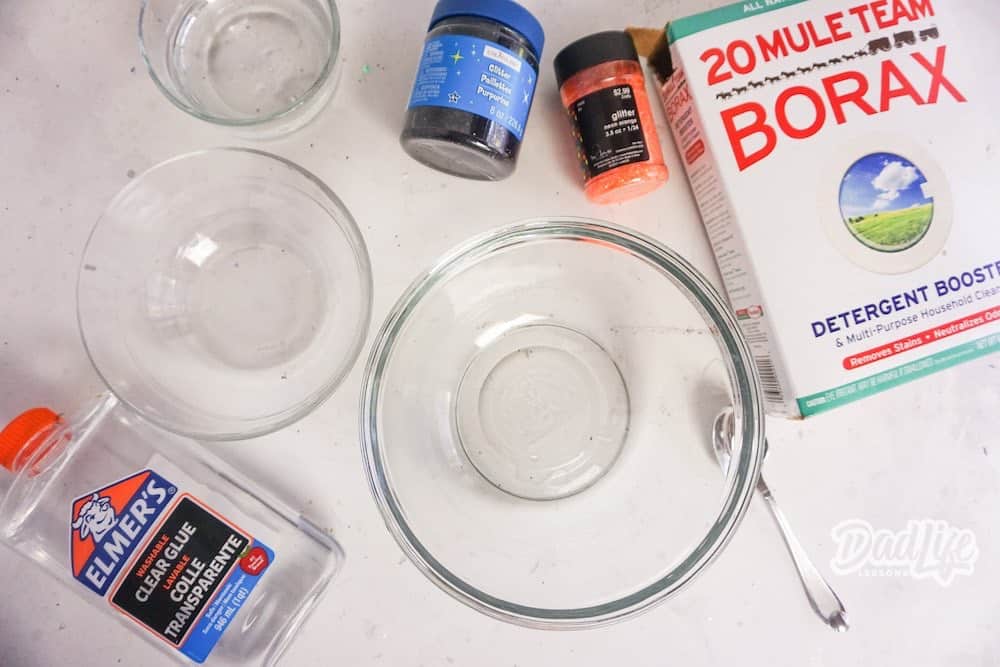 Prepping to Make the Halloween Slime

You’ll have to start with two cups of clear school glue. I have made this with the white glue before and the problem is that the glitter doesn’t stand out as well. So, it can be done, but it’s not going to be as glittery. I would use clear glue for the win.

Also, you’ll need about a half cup of Borax Detergent Booster. Now, some recipes call for saline eye drops instead of this, but the truth is, it’s the same chemical. And the Borax is going to get you a thicker, goopier slime. So, I went with Borax. If you want to switch it out with saline, just be sure you get the ones that have boric acid and use an equivalent amount of contact solution. 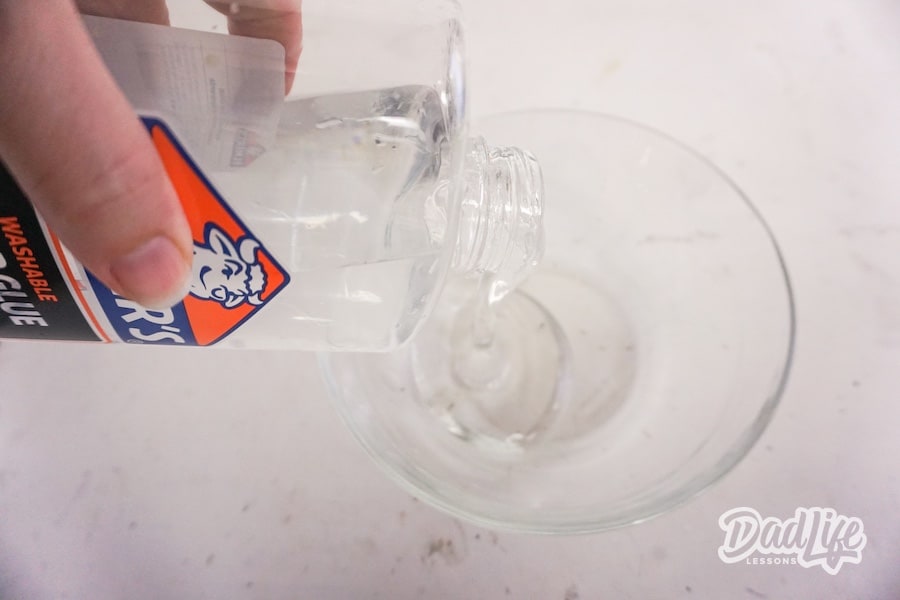 To make the slime, well, liquidy, we have to have a little water. I used about three cups of water. If you want more liquidy, you can go all the way up to about 5 cups of water, but beyond that, you’re not making slime anymore, its more like a watery glittery mess so don’t do more than 5 cups.

Now to make this into Halloween slime…you’re going to need about ½ cup of orange glitter and ½ cup black blitter. I got these at my local craft store in a big container. You could also do purple and black or purple and green. But really, this is the Halloween part of the slime recipe so I stuck with orange and black.

Oh, and you’ll also need three bowls and three spoons. That will just make things easier in the long run. I know this makes for a bigger clean-up, but it’s kind of necessary for the swirled effect.

If you haven’t decided what you are going to be for Halloween yet then check out our 20 DIY Halloween Costumes for Kids.

The only thing I would say is that the Borax can irritate some people’s skin, so, if you have the kids help, be careful to limit direct exposure to the Borax. It’s not going to cause their limbs to fall off or anything, but it might give them a rash. So, even if they get it on their hands, just wash it off with water and they’ll be fine. Once it’s mixed into the slime, it should be diluted enough not to cause any problems. Ok. Now, let’s get started with how to make Halloween slime. 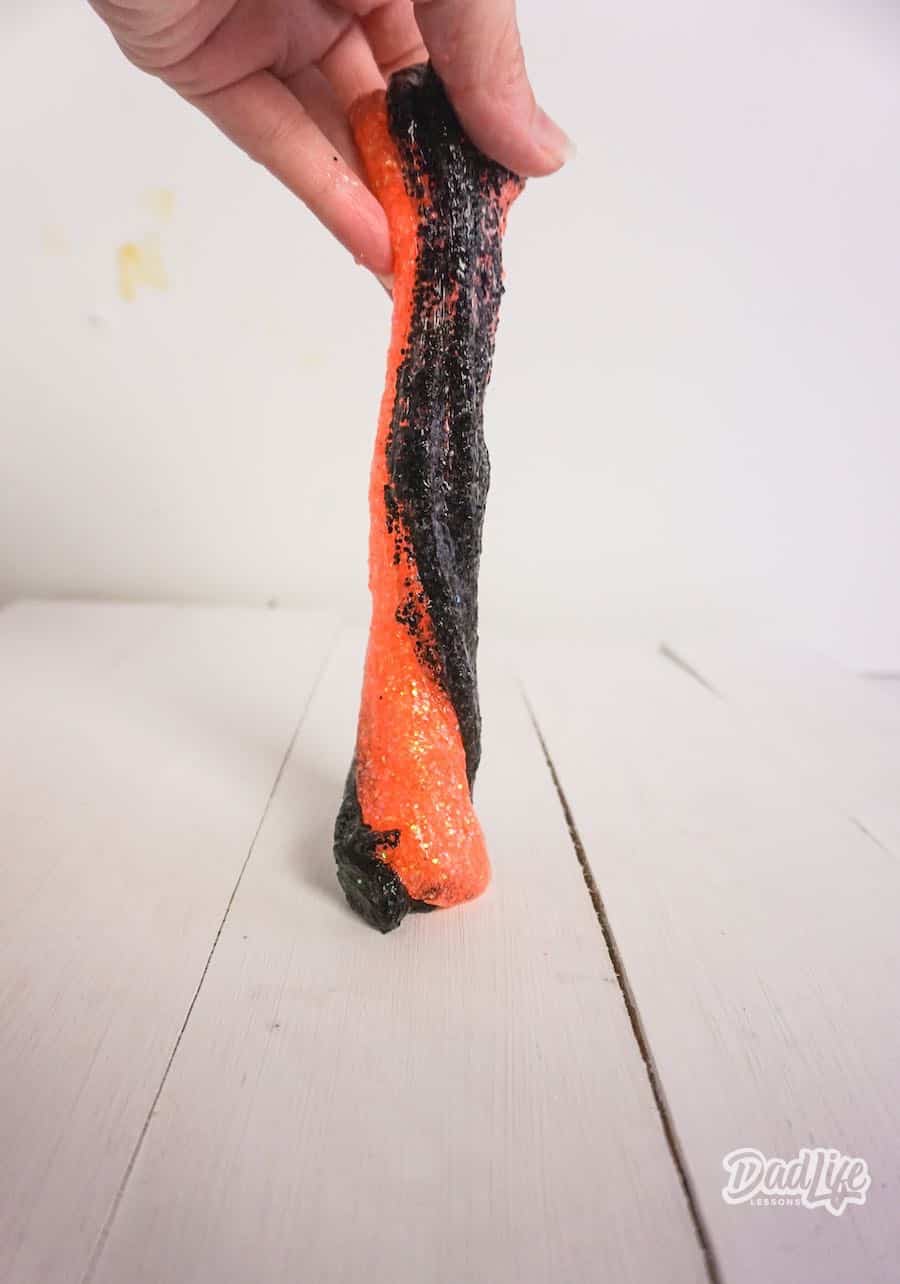 Alright, now that we have all the ingredients together, let’s say we start making some Halloween slime. Place one cup of glue in one bowl and one cup in another bowl. This doesn’t have to be precise. You can just eyeball it if you want.

Now you want to dilute that glue, so add 1 cup of water in each bowl and stir until the glue and water are combined. I would say that if the kids are helping you, this can get kind of soupy and messy at this stage, but because school glue is water-soluble, even if they spill the entire bowl, you can just wipe it up with a wet rag, even after it’s dried. 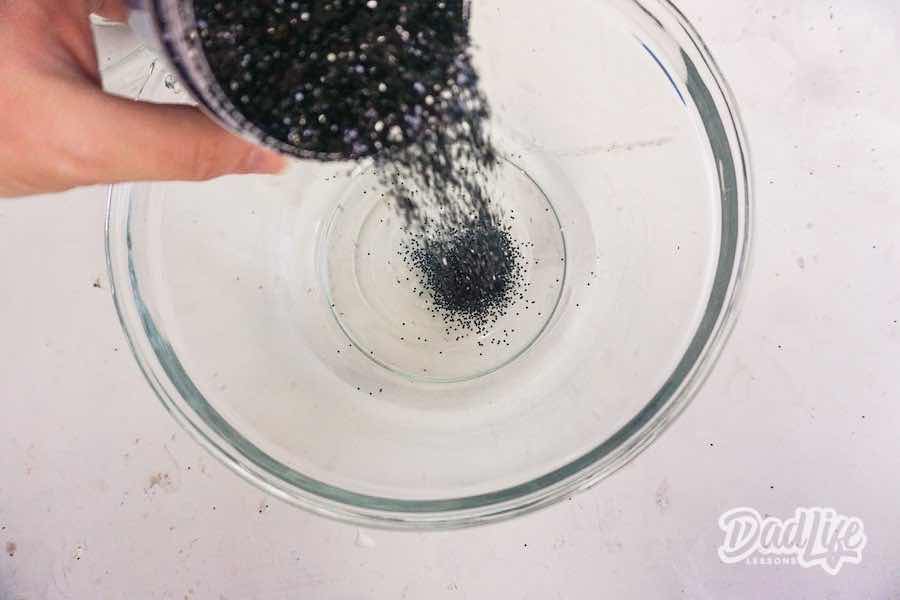 To make this Halloween slime glitter, it’s time to add orange glitter to one bowl and black to the other and stir each until combined. It’s going to seem like a lot of glitter, but the slime will be clear (if you used clear glue) so you’ll see all that glitter. The more glitter you include, the more sparkly the slime will be. The less glitter and you’ll see more clear slime. So, if you choose to go with less, you will have more “empty” spaces. 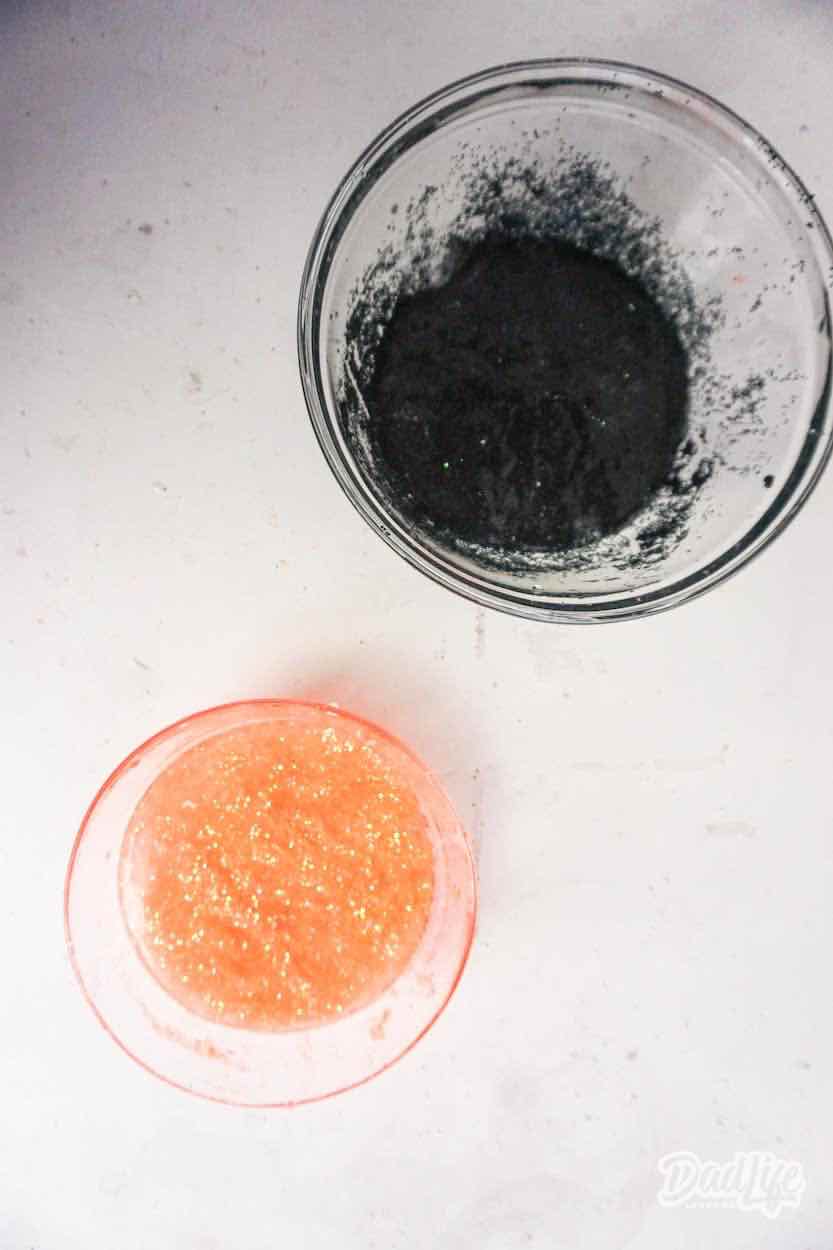 In a separate bowl, mix your remaining water and Borax until the Borax is dissolved. It will never dissolve all the way, but when it’s as dissolved as it will get, you can pour half the Borax water into the orange glitter bowl while stirring. Be sure to stir slowly until your slime is formed.

Pour the other half of the Borax water into the black glitter bowl while stirring. Stir slowly until your slime is formed. 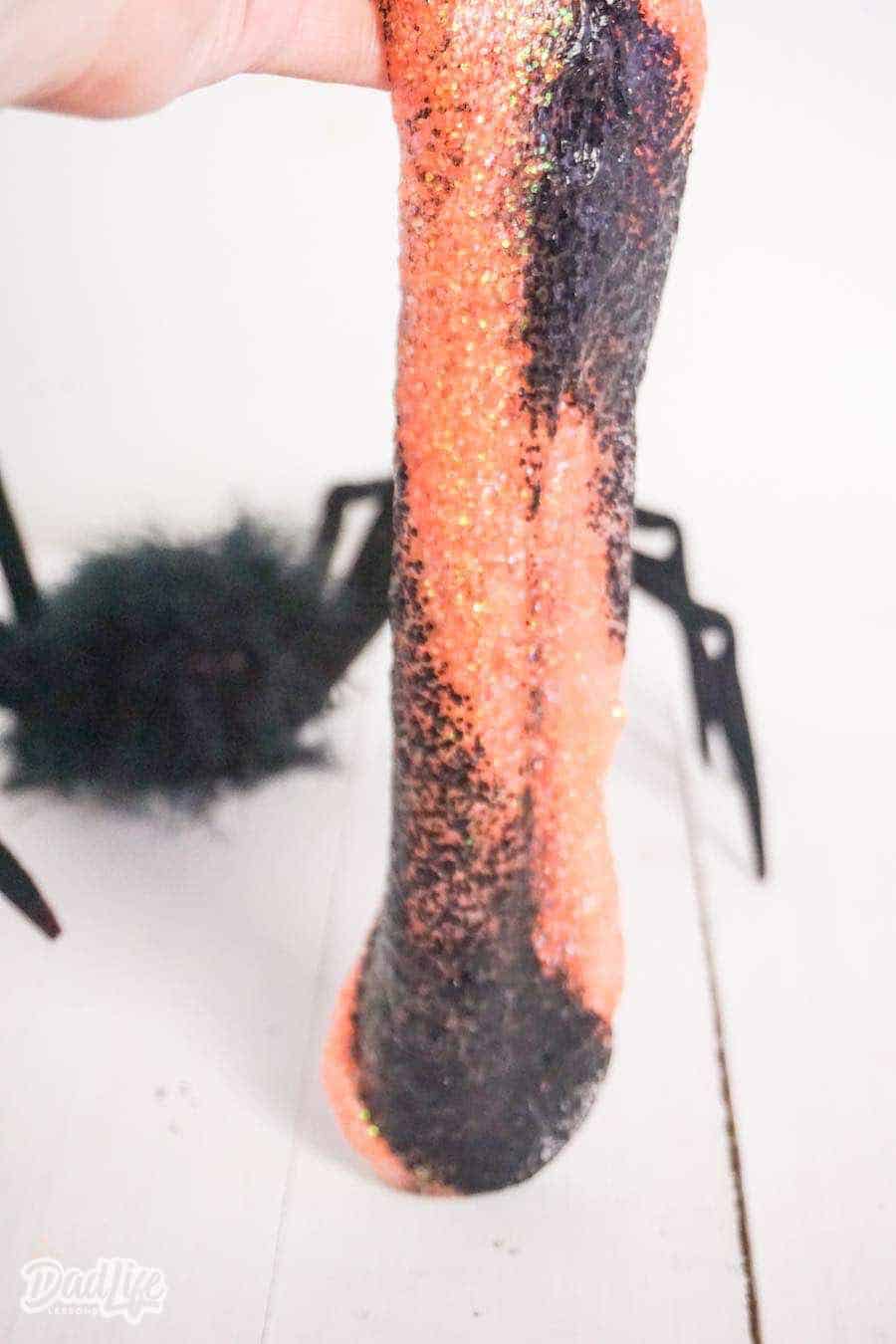 It didn’t take long for my kiddo to get the slime mushed together and combine the colors to be all black. But she had a lot of fun while doing it. And, we got to talk about non-Newtonian fluids and how it’s solid, but not, how if you’re still it will dribble through your fingers, but if you ball it up you can almost keep it in that ball. 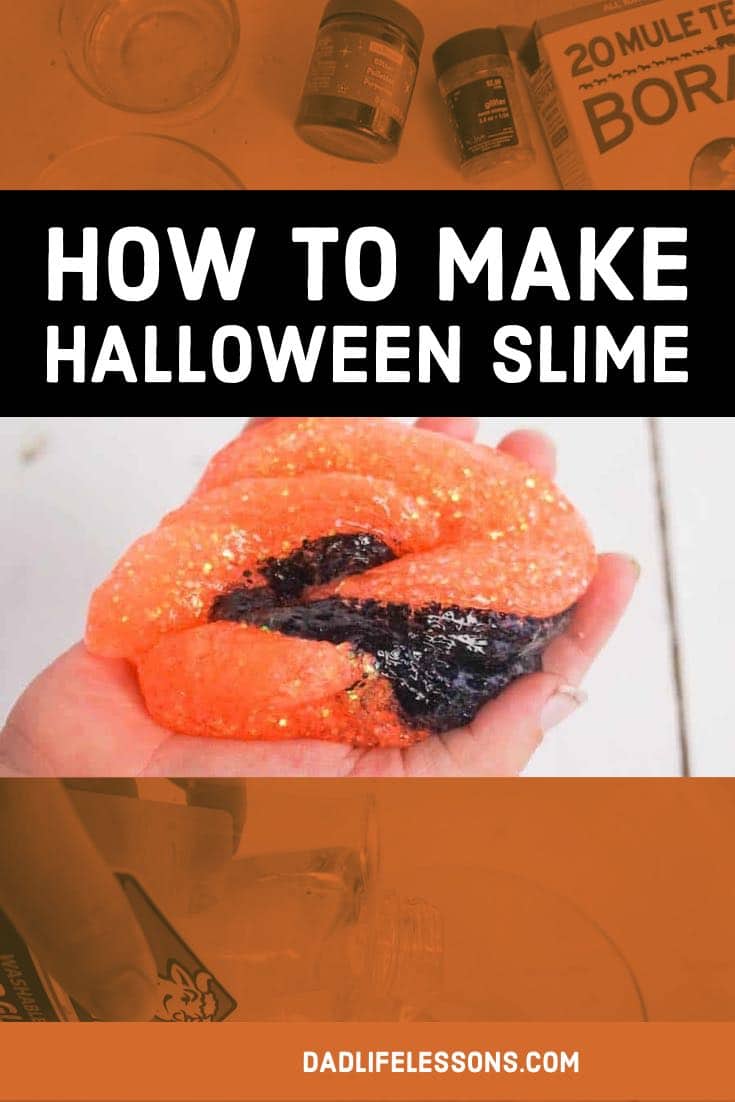 Looking for other ways to occupy the kiddos then check out these 10 Card games to play with Kids!

Now you know how to make Halloween slime to occupy the kids. In all, this is a really neat craft to do with kids and get them busy thinking about Halloween. The best part for me, though? I was able to make this slime, let the kids play with it, then I could store it in a zipper baggie for about three days–letting them play with it over and over. It was not just a one-and-done. Which is nice.

134 shares
Awesome Dad Emails
In these emails, you will find out how to balance being an awesome Dad and keeping your family happy and healthy.